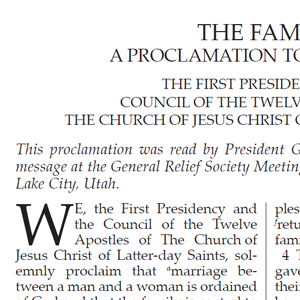 This year marks the twenty-fifth anniversary of when Gordon B. Hinckley first introduced and read “The Family: A Proclamation to the World” in the autumn 1995 General Relief Society Meeting. I thought I’d celebrate by posting this document I started making back in high school. 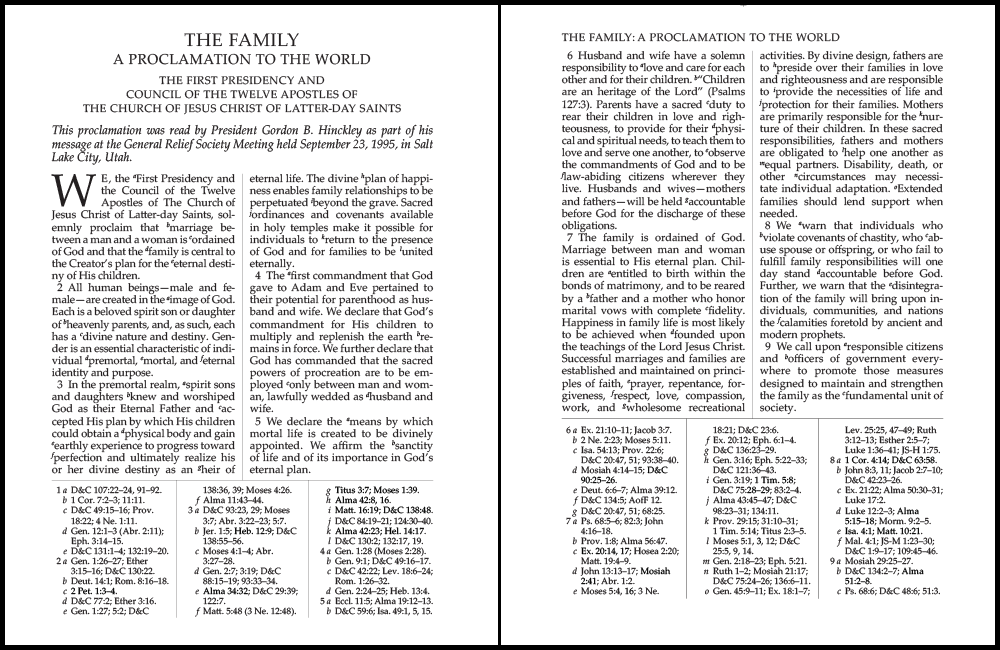 This is a printable front-and-back page that has the family proclamation typeset in scripture style, with double columns and footnotes. Cut it at the trim marks, apply a little rubber cement to the edge, and you can add a page to your scriptures!

Please note that you may need to ignore the trim marks and custom trim it in order to make it fit just right. I’ve made large, regular, and small sizes to match the various sizes of scripture editions available.

I made this page insert back in high school because I wanted it to be in a place that was quick and easy to access. (I did the same thing for my patriarchal blessing, with footnotes. I originally numbered the second page of the Proclamation with a “64,” because my patriarchal blessing was inserted as pages 61–62, then this Proclamation came next.) Creating the footnotes was a great way to study the proclamation for myself. Do you have any additional cross-references you would add?

Seeing the Proclamation in this form raises a fun and interesting question: do you think it will ever be canonized and put in the scriptures? Like, perhaps as Official Declaration 3? I would of course welcome it if it was, but I kind of doubt it will be. However, there’s a far more important point to make: the Family Proclamation is already authoritative, without needing to be canonized first.

For a sampling of statements by apostles and Church leaders affirming that the Family Proclamation is doctrine, not some transient policy that we should expect to be retreated from if the media spotlight gets uncomfortably warm, see this article on FAIR demonstrating that “Church leaders have repeatedly taught that the Proclamation is official doctrine.” If an idea is repeatedly taught in official publications, over the signatures of the united, unanimous First Presidency and Twelve Apostles, it’s doctrine. Especially if it accords with a nexus of other clear doctrines taught over millennia. The segment of people who reject the Family Proclamation but would suddenly wholeheartedly accept it and teach it, if only it were canonized, seems vanishingly small.

It seems worth mentioning something I heard Bob Millet teach once, about the canonization of the New Testament, which happened within a few centuries after the Savior’s resurrection and the apostles’ deaths, as early Christians held councils and recognized the various books found today in our New Testament. Brother Millet pointed out that it was not the canonizing of the New Testament books that made them authoritative; it was their authoritativeness that led to them being canonized. That is, the authority of the texts was based on who wrote them, not on who chose to accept them. The masses in those councils didn’t hold power to bestow authoritativeness on those writings; the people could only acknowledge the writings’ authority and commit to follow them, or reject them. But the books were already authoritative the whole time, regardless of whether or when they were canonized. I think there’s a lesson there for us today.

Pushing the Pendulum Back

The Family Proclamation was published my senior year. I remember when I first read it as a seventeen-year-old, it seemed unremarkable, just a slight condensing and repetition of prophetic teachings that I’d heard and read a hundred times in Church manuals and talks. The only passage that seemed slightly controversial enough to perhaps give some individuals a bit of indigestion was the pair of sentences about husbands and wives having different roles. It wasn’t new; just unpopular among elites and conventional media. Other than that, the Proclamation didn’t really seem that noteworthy.

My how times have changed. The most innocuous common sense is becoming increasingly seen as at best silly, and at worst dangerous. “At that day shall he rage in the hearts of the children of men, and stir them up to anger against that which is good. And others will he pacify, and lull them away into carnal security” (2 Ne. 28:20–21). The principles in the Family Proclamation are more needed than ever, as they become less commonplace. Conjugal marriage can be restored as a strong civilization-wide institution, but it will take generations to do so now, with how far we’ve fallen. The saddest part of that process is the innocent lives that are damaged in the meantime, in the wake of popular currents and conventional wisdom. It remains to be seen which parts of the world will embrace the Family Proclamation and reap the blessings, and which parts will react with hostility and rejection, to the detriment of themselves and those around them.

The rebel of the future will be old fashioned.