One way I study the scriptures is by redesigning them in different ways. It started out as a one-time experiment on a free Friday night during my junior year in college, but I’ve ended up reformatting almost the entire standard works. 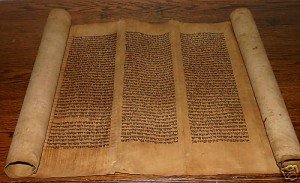 When the scriptures were first written, there were no verse numbers or chapter breaks.

I start by copying an entire book (e.g., Matthew, or Abraham), paste it into Microsoft Word, superscript all the verse numbers, and remove all line breaks—leaving the book as one long block of text, much as the scriptures appeared when they were first authored (see image at right).

Then I read through them in my personal study time, hitting Enter occasionally to create paragraph breaks where they seem appropriate. I insert headings when I think I’ve found a natural division between sections, and sometimes I place a passage in a shaded box, such as when the author temporarily strays from the narrative to explain something (e.g., 1 Nephi 6). I also color spoken text, such as when two characters are dialoguing (e.g., Exodus 4), which allows you to see how long a speech is before you start reading it.

If I’m feeling really ambitious, I’ll hyperlink passages to each other when the storyline jumps from one place to the other. For example, in the book of Acts, at the point in the story where Paul (probably) wrote 1 Thessalonians, I’ll put a link to that book. This way a reader can choose to read the scriptures in chronological order, pausing his reading of a historical book (e.g., Acts) to go read a prophetic book or an epistle (e.g., 1 Thessalonians). Sometimes I will insert comments off to the side in my Word documents to record some insight or helpful quote, but that task is perpetual, so it’s never quite done.

The result is a personalized version of the scriptures that is often much easier to read. In fact, I learned so much in the process of doing this, I was initially reluctant to share my results; I thought others would be more benefitted by doing the task themselves. That way each person could organize the scriptures according to what made sense to them. After all, I don’t know that mine is the only or best way of designing or laying out the scriptures. But my dad protested and said he really thought I should give others access to my redesigned version.

In the end, I decided on a happy medium: I’ll post the beginning Word files, complete with automatic Styles installed for those who want to use them, and I’ll also post my version of each book. You can find the files in the following section of this website:

My hope is that others will try this exercise and talk about their results. I expect that they’ll organize the scriptures in different ways, and that can be a springboard for interesting discussion. As I add each book, I’ll announce it in a blog post, and the comments section will give readers a chance to swap ideas and compare their results.

I’ve also taken the next step and typeset my version as a book, which can be viewed as a PDF or ordered online as a hardcopy. You can find the files in the following section of this website:

Jump to Comments
Next: Thrash the nations →