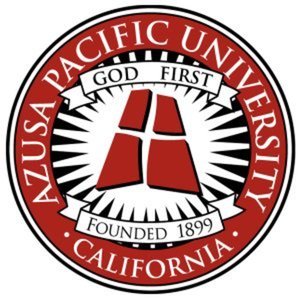 We had an interfaith dialogue today with a group of about nine students and their professor, Dr. Dennis Okholm, from Azusa Pacific University, in the Los Angeles area of southern California. I invited some friends (Nicole, Kendel, Kevin, Jamie) and luckily Kendel rounded up some additional buddies so we could have about even numbers. That way everyone gets more of a chance to talk to someone else.

I happened to answer the door with my 12-day-old baby in my arms, and all the girls on the porch, in unison, knit their eyebrows and said, “Awwwww!” It was really funny! I recruited one to hold him while I gave a little five-minute introduction. I explained the purpose and scope of dialogue—that’s it’s more about understanding than persuasion. There’s nothing inherently wrong with trying to persuade someone. We call it missionary work, and it’s a core principle in both of our faiths. But when people are first getting accustomed to comparing and contrasting their beliefs with others, and trying to do so without that contentious atmosphere that can so often develop, one thing that helps you feel “safer” and more comfortable is to set aside for the time being any attempts to persuade, and to just ask questions that help you understand what they believe. And besides, a person who’s committed to trying to convert the world would probably recognize that the first step toward believing a new idea is to accurately understand it. We find plenty of areas of disagreement, but at least we’re disagreeing accurately. 🙂

We also gave a few practical tips: Keep groups small, no more than six people, and preferably about four (otherwise it becomes a panel of monologues, instead of the more enjoyable back-and-forth). Don’t feel like you need to stay with the same group the whole time; feel free to get up and wander, and use the refreshment table as an excuse. 🙂 To get the discussion going, try asking another person how long they have been Mormon/Christian and how they came to their convictions.

Dr. Okholm was really good about keeping a low profile. By that I mean, he tried to keep his comments to a minimum. Greg Johnson has explained why on previous occasions: he’s noticed that when an older adult or professor chimes in too much in the little discussion circles, the students tend to speak less and defer to him instead of participating. That makes sense, and I’ve seen Robert Millet minimize his comments as well when he’s at dialogues. The purpose is to help the students/young people get as much experience as possible in the back-and-forth exchange of face-to-face dialogue. As Dr. Okholm (or Doc Ok, as the students call him 🙂 ) said, “I get to do this all the time; who knows when these students will get opportunities like this again.”

God’s Will or God’s Character?

At one point I came into a discussion late. I heard the following exchange:

Mormons: “Boy, I don’t know. That’s probably one of those questions that’s beyond the scope of what’s been revealed.” [That’s a very important thing to be able to say, by the way, for people from either faith. And to be able to accept graciously when someone else says it.]

I chimed in, at the risk of not having heard the whole exchange. I repeated the question, “Are you asking whether someone in heaven, like in the celestial kingdom, has the ability to sin?”

“I’d say, sure they can. In fact, I think God can sin. But he doesn’t. That’s what makes his righteousness meaningful—the fact that he could do otherwise. Plus, if we say that he can’t sin, then that means there’s something bigger and more powerful than him that’s preventing him from doing so.” I’m not saying that’s doctrine; it’s just what makes sense to me.

Both the LDS and evangelical student’s looked thoughtful but didn’t really have anything to say in reply. Dr. Okholm spoke up. “I see what your saying. Can I put it a different way? Do you think God doesn’t sin because of his will or because of his character?”

“I’m … I’m not sure I understand the difference. Isn’t our character composed of what we choose to do and not do? I think there’s a technical definition of character that you’re using, that I’m not familiar with.”

“We believe that it’s not in God’s nature to sin; it’s not a part of who he is, so that’s why he’s not capable of it.” [Rough paraphrase; don’t hold Doc Ok to that wording.]

It was an interesting exchange. It seemed to me that it was closely related to what my buddy Jeff has called the Greek versus the Hebrew worldviews. This is a gross oversimplification, but Greek thought emphasizes static attributes that determine actions and outcomes. Hebrew thought, on the other hand, emphasizes dynamic actions and change, and would call abstract principles or attributes useful ways of describing or conceiving of events, but not actual realities that determined those events. Needless to say, I think the Hebrew worldview is friendlier to important doctrines like agency. If I have a “character” that determines what I will choose, then how do I really have a choice? And how is it meaningful to call me “good” or “obedient,” if I couldn’t really choose otherwise? I might be oversimplifying Dr. Okholm’s view, though. It’d be interesting to see how traditional Christians have dealt with that problem (I’m sure I’m not the first person to point it out).

At another point, I overheard an LDS guy say, “… I think that’s a big difference in how we think about Christ’s Atonement. Because Latter-day Saints draw a sharp distinction between what happened in Gethsemane and what happened on the cross.” I kind of winced, and I would have liked to have heard the whole exchange. If I had the chance, I might point that guy to a couple articles by Gerald N. Lund that might change his mind on that topic:

Some might assume, for example, that we believe Christ’s death on the cross covered only the effects of physical death and that his suffering in the Garden of Gethsemane covered only the effects of spiritual death. But the scriptures make it clear that Christ’s agony in the garden and his suffering and death on the cross were all integral parts of the atoning sacrifice. (Ensign)

Anyway, it was a great dialogue, a really good group. And they brought food!

Jump to Comments
← Prev: Thrash the nations Next: Joseph Spencer on Isaiah, baptism, and the Godhead in the Book of Mormon →