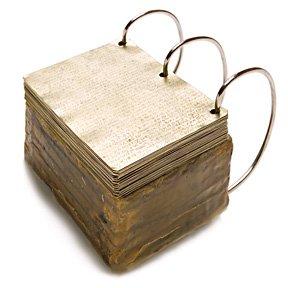 You can now download a cleaned-up Microsoft Word file of the Book of Mormon over on the Do-It-Yourself Scriptures page. In this post, I want to discuss some of the interesting textual features that are unique to the Book of Mormon, as well as how those aspects might affect the way a person would redesign the book.

In several passages of the Book of Mormon, a section is introduced with what has come to be known as a “headnote.” The main thing that makes it them stand out is that they are not complete sentences (i.e., they are dependent clauses), and they are phrased in such a way that they put a descriptive label on the section that follows after them. They frequently occur at the beginning of a book (where they usually begin “An account of …” ):

With few exceptions (e.g., 3 Nephi 11), each of the above headnotes begins with a dependent clause—a noun phrase. That’s the main feature that makes them recognizable, and I imagine that’s how John H. Gilbert (E. B. Grandin’s typesetter) recognized them as distinct from the narrative around them. However, I don’t think he identified all the headnotes.

I found in a careful reading of the Book of Mormon that there are several other candidates for headnotes that are not currently typeset as such. Read the following passages in context and decide whether you agree with me:

In the last three cases, I am not referring to the whole verse, but rather the text up to the first dash or semicolon.

The cases in Moroni are kind of ambiguous; they definitely introduce and label the passage that follows, but they also are not grammatically distinct from the text that follows, but run straight into it instead. Whether they count as headnotes would ultimately probably depend on the criteria you decided to set for the definition of “headnote.” But I think the first two cases are undoubtedly headnotes; I see no difference in form or function between them and the passages traditionally typeset as headnotes.

When I tried redesigning the Book of Mormon, I dealt with headnotes by creating a unique headnote style and applying it right after a heading. That way the reader could tell that the headnote referred to everything under that heading, and thus did not really need a chapter range to refer to. Interestingly, I eventually found other passages in the Doctrine and Covenants and the Pearl of Great Price that I think are candidates for headnotes as well:

In some cases it is genuinely hard to tell whether something should be considered a headnote (such as Moro. 4, 5, and 8). And in passages where you can tell, it can be hard to tell where the headnote text itself ends. For example, Moses 1:1; does the headnote end at verse 1, or 2, or partway through verse 2? A case could be made for each option. Also, I don’t recall encountering yet a mid-chapter headnote, but I wouldn’t be surprised; I don’t consider “being the first verse of a chapter” a requirement to be a headnote.

I frequently go back and forth on my choices, sometimes opening my text files and changing a decision, only to switch it back after mulling it over for a few months. When given two equally likely options, I sometimes lean toward the less common interpretation—just to get people thinking. I may be (probably am) wrong in several cases, and that may be a frowned-upon methodology, but if it gets people reading the scriptures more closely, I think it’s worth it. To see how I handled the three examples from the book of Moses above, download the PDF of the Pearl of Great Price in the Structured Edition section of this website.

(By the way, I suspect that the headnote at Moses 4:32 refers to the text that follows it in chapter 5, not the text that precedes it in chapter 4. If I ever get around to it, I will explain my reasoning in a post that accompanies a side-by-side comparison of Genesis, Moses, and Abraham.)

The Book of Mormon contains many digressions, where the author pauses the story he’s telling in order to give some background or explain something, and then he resumes the story. I’ve categorized these into two kinds: chronological digressions, or flashbacks (e.g., Alma 17–27); and topical digressions, or explanations (e.g., in Ether 4, 8, and 12). At first I intended to mark these with headings, but I found that that didn’t always work. For example, Alma 17 begins a major section about the missions of the sons of Mosiah. It flashes back 14 years to when they first left Zarahemla. The flashback ends in Alma 27 when they return to Zarahemla and meet up with Alma. However, the section about their missions does not end there; it ends two chapters later in Alma 29. I would begin the missionary section with a heading at Alma 17, but where would I put the next major (i.e., same level) heading, at Alma 28 or Alma 30? I realized I needed to use two different typographical features to indicate major sections of books versus digressions.

I decided to use headings to mark major sections (i.e., Alma 17–29) and shaded boxes to mark digressions (i.e., Alma 17–27). That allowed me to illustrate Mormon’s literary structure more naturally. I think it freed me up in a lot of ways that wouldn’t be possible if I had tried to mark both literary structures with the same typographical feature.

To see what this looks like on the page, you’ll have to wait for me to finish my Structured Edition of the Book of Mormon. For the time being, you can look at this (very rough and ugly) version of a few pages from Alma to get the basic idea. (Ignore the messiness and incompleteness of it, like the place-holder references in the running headers.)

One benefit of this is that, when you get to end of a digression and the story starts again, if you can’t remember what was happening, all you have to do is scan back to the beginning of the shaded box to remind yourself what was going on. Another benefit is that you can try skipping the digressions in order to stay with the narrative. That can be a fun way to read the book of Mormon, as it allows you to really cement the narrative in your mind. Of course, you’ll want to go back and read those digressions at some point (perhaps after the narrative has reached a good pausing point), because they often contain the most important lessons the Mormon is trying to illustrate.

Sometimes when I had trouble figuring out the precise place to start and stop the digression box, I could rely on Mormon’s tendency to repeat the same phrase at the beginning and end of one of his digressions. This literary device, by the way, is called repetitive resumption, and it is an excellent criteria to use when setting the boundaries of the shaded box. I couldn’t use it in every case of repetitive resumption, of course, because some are only a few words or lines apart, and I tried to limit shaded boxes to substantially long digressions.

These are just a few examples of literary features that ask to be addressed when redesigning the Book of Mormon, and some possible solutions. What other structural features do you notice in the Book of Mormon that could be made more comprehensible and explicit through typography and design? What methods would you use to illustrate Mormon’s way of structuring the Book of Mormon? Do you find that his style differs in any noticeable way from the other three major authors, Nephi, Jacob, and Moroni?

Jump to Comments
← Prev: Do-It-Yourself Pearl of Great Price Next: The book of Abraham facsimiles in high resolution →