Correction about Mormons in the book ‘Sacred Places’ 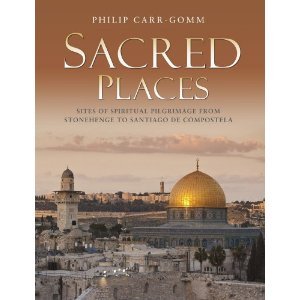 So the other day I was at Barnes & Noble and I picked up a book by one Philip Carr-Gomm called Sacred Places, a kind of a coffee-table book about holy sites around the world. It didn’t include In-N-Out, so it couldn’t be that accurate, but it had lots of pretty pictures. I found myself doing what some others probably do, too—turning to the index and looking up my own church to see what it says. It only mentioned the LDS Church in one passage, about the Cathars, a 12th century heretical group in France. After talking about books like The Holy Blood and the Holy Grail (which lent many key ideas to The DaVinci Code), the author says some things that made me shake my head because he got LDS beliefs so wrong. I tracked down the author’s secretary’s email and voiced my concerns about the paragraph:

The passage in question is in Sacred Places, in the chapter on Rennes-le-Château, on p. 107. (I will number the sentences for reference.) After discussing books like The Holy Blood and the Holy Grail, the author says:

[1]The central idea behind all these books is one that clearly holds immense appeal for many people: the idea that Jesus did not die on the cross, that he married and was a sexual being who fathered children. [2]This is, after all, a central tenet of one of the world’s faster-growing Christian movements: the Mormon Church of Latter-day Saints. [3]Instead of Jesus being born of a virgin and dying a virgin himself in an agonizing death, he is seen as a partner to a holy woman. [4]The universal archetype of a god and goddess who together are fertile, like Isis and Osiris, seems more satisfying to many people than the sterile figure of a lone god who fails to pass on his seed.

This paragraph is factually problematic for several reasons, and in some cases, on points that Mormons feel very strongly about and would be very grieved if they were misunderstood on. I’ll try to be concise and provide sources, but please feel free to ask questions if you need further explanation.

1. The name of the church is The Church of Jesus Christ of Latter-day Saints (which can be shortened to “the LDS Church”). The Church is sometimes called “the Mormon Church,” and while that’s not offensive at all, most members prefer that people use the real name (even though we understand it’s a bit long). The main reason for that preference is that by shortening the name to “Mormon Church,” it takes out the most important element of the name: Jesus Christ (source). The composite name Philip uses in sentence #2 is inaccurate. (By the way, it’s fine to call the members of the Church “Mormons”.)

2. Philip mentions three ideas as being three central tenets of the LDS Church (in sentence #1). However, none of these is a central tenet. The first is directly opposite of what we believe, and the latter two are considered speculative possibilities by some, but are nowhere near central tenets.

3. In sentence #3, Philip implies that Mormons believe the Jesus was not born of a virgin, although the phrasing of the sentence makes it difficult to tell whether he was attributing that idea to Mormons. Mormons most definitely believe in the traditional biblical account of Jesus being born of the virgin Mary (source).

4. Sentence #4 is fine. In fact, many Mormons would probably like that statement. We do find great meaning in the idea of a partnered God passing on life to his literal children.

Be assured, I don’t mean to be critical; I just want to help Philip be accurate. In fact, he is correct in drawing interesting comparisons between LDS doctrines and some of the themes in the whole DaVinci-Code-esque line of speculation that Jesus was married, that God has a marital partner, etc. Latter-day Saints do believe that Heavenly Father (God, Jesus’s father) has a wife, Heavenly Mother. We do believe that sex is sacred and holy, not icky. And while Latter-day Saints don’t necessarily assert that Jesus was married during his mortal life, our main departure from the rest of Christianity on this point is that we’d be OK if it turned out that he did.

Whereas (as I understand it) most traditional Christians see Jesus’s divinity as necessarily excluding the possibility of him being married or being physically intimate with a wife or fathering children, Latter-day Saints don’t see the two as being mutually exclusive. Most are fine with the idea of a married Savior, or of a Father in Heaven who is one with his companion in all ways, including physical union. No problem.

But to us the odd thing is that, apparently for many people, to say Jesus was married or a father is to say, “Therefore he was not born of a virgin, and he did not die on the cross, and he could not have been God in the flesh.” To Mormons, the former possibilities do not of necessity lead to the latter conclusions. We do not connect the dots that way, and in that sense we differ greatly from traditional, creedal Christians. We will defend the virgin birth, the redemptive death, and the divine sonship of Christ, but we feel no concomitant need to insist on the single status of Jesus or God. We don’t have a dog in that fight.

I hope that helps. Religion can be a tricky subject to write on without making somebody unhappy, so kudos to Philip for wading in and making a good-faith effort. I feel like I’ve been long-winded, so I’ll end here, but if you’d like me to suggest a way to rephrase that paragraph so that it accurately reflects LDS (Mormon) doctrine, while also highlighting the interesting and valid connection that Philip sees between Mormons and the god-goddess archetype, I’d be happy to oblige. Just email me back and let me know your thoughts.

Thanks for your time, and your desire to depict others truthfully,

Just this morning I got an email back from the author (at 3:22 am—either he’s an early bird, a night owl, or lives in England!). He was really nice about it, and has given me permission to post our conversation publicly. He said,

Please accept my apologies for the very late reply to your detailed email. Thank you so much for taking the time and care to make your comments, which have been extremely helpful—clarifying the detail in these issues very clearly. Unfortunately the publisher released a new edition of the book back in June (without even telling me in advance—I discovered this by accident), and I suspect it is unlikely to reach a third edition. But if you are able to suggest a re-phrasing of the paragraph, as you kindly suggest at the end of your email, that would be wonderful.

As you can imagine, one of the tricky things about writing in such formats is that I am having to keep to a strictly limited word count for each section—and within that, dealing with topics that really need far more space to do them justice. If life has moved on and you have no time for this, not to worry, I can work on it. But if you are able to, I will keep it in case another edition takes off, and I would also like to create a blog post that can at least correct what I have said through the medium of cyber-space.
Once again many thanks for writing—it is much appreciated.

This experience left me with couple thoughts:

1. I’ve learned over time that there is a big difference between someone who says something wrong about the Church, and an anti-Mormon. So there’s no need to be snarky or assume the worst about someone, even if they make a gross error regarding LDS doctrines and beliefs. We can be diplomatic and charitable and assume the best about someone’s motives, and usually we’ll turn out to be right—they simply had no idea, and are happy to be corrected.

2. Writing about others’ religion is hard, and I probably would have made just as many mistakes if I’d been asked to write about, say, the difference between Jainism and Sikhism. Both of those religions have several million adherents, but what average Latter-day Saint (or American, even) knows anything about them? The LDS Church is relatively small and a new-comer historically, so we should expect that most people haven’t had many opportunities (or even the desire) to learn about us in any real detail. Mistakes are inevitable when it comes to religion, and even more likely when it comes to small or young religions. We can take that in stride, with good humor.

3. Philip, the author, also added another thought/lesson related to the fact that it took him two months to reply to my email: “In addition to the point you make, it’s so easy to develop all sorts of fantasies when someone doesn’t reply, when very simple explanations like lack of time, the email getting lost, etc., usually proves to be the case!”

I also have a couple questions for readers:

1. How’d I do? Was there anything in my email to the author that wasn’t clear? Did I get anything wrong? Did I leave out anything important?

2. How should I reply? That is, how should I phrase a substitution paragraph for his book? It’s not a book about Mormons, so it can’t go into great detail, and it’s not going to cover some of our most important beliefs like the Atonement, because his topic in this passage is very narrow. But it would be fun to craft for him a paragraph that accurately reflects LDS beliefs while also making his (very interesting) point about, for example, how some medieval Cathar beliefs actually overlap with some modern LDS beliefs, or about the fact that Latter-day Saints are virtually the only Christian group that allows for a married God.

Jump to Comments
← Prev: The book of Abraham facsimiles in high resolution Next: Prophetic counsel, Mitt Romney, and Ron Paul →