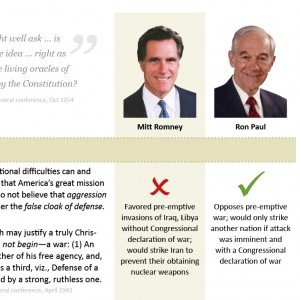 Below is a chart comparing Mitt Romney’s and Ron Paul’s political positions with counsel from latter-day prophets and apostles. My wife researched and created this chart, and I helped with the design and some editing. It’s imperfect, but we’ve decided to share it anyway and have posted it below.

By the way, if you have any reservations about applying prophetic counsel to politics, please read our post, “Voting Criteria for Latter-day Saints,” that addresses that issue.

Neither my wife nor I has ever really been involved in politics. Besides being turned off by the inevitable contention, we’re frequently bemused at how sincere, well-intentioned, intelligent people can come to such different conclusions given the same information. We’ve often felt inclined to give up any hope of figuring it out ourselves. But we also feel a nagging duty to be informed, honor our right to vote that was won with so much difficulty by our ancestors, and try to affect the world for good. We’ve both become fans of Ron Paul, and we’ve been enthused enough by his ideas and character that we’ve taken our first foray into politics. 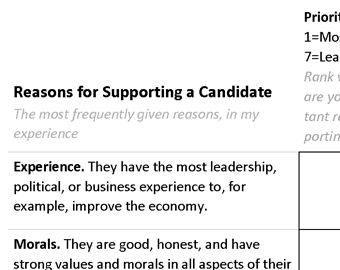 It’s obvious from glancing at the chart which candidate we favor, but we did try to be fair and accurate in our ongoing study of the issues. We want to be clear about a few things: We have nothing personal against Mitt Romney and are sure he’s a fine member of the Church. We don’t think you have to vote for Ron Paul in order to be a good Mormon. We definitely don’t think these statements from the Brethren amount to any kind of endorsement, nor do they even constitute the official positions of the Church. Also, our research is ongoing (as is our personal education in general); we expect to eventually find reasons to modify the chart as we study more and come to clearer understandings of several topics. This chart is a snapshot of our current understanding of things. It’s probably pretty one-sided right now, but we expect to continue learning. I suppose one could argue that we shouldn’t share it until we’re thoroughly done with our research, but I’ve learned that many times, the learning process is never done. Plus, we figured that sharing it could be part of our research by generating discussion. In the comments below, we’ve found some interesting points that will hopefully lead us to further reading and a better understanding.

Some question whether a chart like this is a good exercise. We feel that it’s a great way of applying the prophets’ urging to “study the issues and candidates carefully” and to “ask … is the proposal, the policy, or the idea … right as measured by the counsel of the living oracles of God?” We’re sure others will come to varying conclusions, but as for us, we really do think for several reasons that Ron Paul is the best candidate for president because he most closely follows the repeated and united counsel of modern-day prophets as well as the letter and spirit of the Constitution.

Voting Criteria for Latter-day Saints: What the prophets have said (and not said) we should consider when voting for a candidate. Also includes a handy chart to help you look at your own voting criteria.