Structured Edition of the Doctrine and Covenants, draft 2 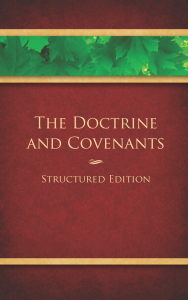 The footnotes are messy, but it’s finished enough to be readable and of use to some. My wife designed this cover for the print version of the current draft.

I have posted the current draft of the Doctrine and Covenants on the Structured Edition page. You can download it there or in the green box below. Please note that it is a draft, not a finished product. It is mostly complete; the main thing left unfinished is the footnotes. I have inserted several footnotes and left blanks where I plan to fill in information at a later time (mostly because I haven’t yet done the research; I just know that some kind of information needs to go there). I also may add more appendixes as I come up with them.

Also, you can download a small collection of handouts giving an overview of the D&C, which includes a timeline of when the revelations were received, a list of suggested titles for each section, and a checklist for reading the D&C in chronological order, in harmony with Joseph Smith—History and the Articles of Faith.

With most installments of the Structured Edition, my primary purpose has been to discern the inherent structure and draw attention to it through headings, etc. The flip side is that I’ve tried to avoid the temptation to impose an artificial structure on it. But the Doctrine and Covenants is different. It consists of discrete documents, distinct revelations that stand alone and are not directly related to each other textually. I came up with unique names for each section (an interesting project in itself, which I plan to write about in a later post; until then, you can see my titles on the D&C overview handouts). But above the level of individual revelation, there are no inter-sectional ties. Whereas the Book of Mormon had a prophet-editor who tied it all together with transitions and an overarching storyline, and the Bible appears to have had someone drawing a story arch across Genesis through Nehemiah, the Doctrine and Covenants has no transitions or storyline. In other words, there isn’t much of an inherent structure for me to highlight. I kind of had to create one after the fact.

The highest level of division was easy: geographical time period. The central Church population moved from place to place in fairly easy-to-separate time periods (scholars of Church history, for example, often refer to “the New York period,” etc.). The sections divide fairly neatly like this (with four exceptions):

The four exceptions are sections 1, 133, 134, and 137 (all received in Ohio). There are other blocks of sections that were received away from the Church center. For example, sections 57–62 were received in Missouri, but that doesn’t change the fact that the Church was still based in Ohio at the time. These highest level divisions are portrayed on the page as “Part One,” “Part Two,” etc., kind of like a novel. (By the way, all this information so far did not require any special research other than reading the Chronological Order of Contents found in your regular 1981 edition of the scriptures.)

The second-highest level of division is portrayed on the page like the chapter of a novel. These were the divisions that could be the most difficult to make. Some were easy: sections 2–19 all occurred during the translation of the Book of Mormon, and most are at least indirectly related to that labor; sections 98–105 are all pretty closely related to Zion’s Camp. Others were hard. By the time period of sections 63–97, so many different things were going on (missionaries, the JST, publishing the revelations, temples, the United Firm) that it’s really hard to see any kind of clear grouping or divisions among that string of revelations. I ended up placing a bit of an arbitrary division before section 84, because that’s where the command to build a temple comes (hence I named the group of sections 84–97 “Building the house of the Lord”).

That left me with a block of sections 63–83. I couldn’t really further subdivide them. (I considered grouping sections 74–83 and calling it “Translating the scriptures” or something, because sections 74, 76, and 77 all have to do with the JST project and scripture commentary in general. But then so do sections 86, 91, 93, which wouldn’t be in that grouping. Plus, I read an interesting article by Robert Woodford saying that section 74 actually wasn’t related to the JST.) In the end, I gave that grouping the generic name “Revelations and Translation.” I freely admit it’s kind of an arbitrary division and label, but it was the best I could think of, and it was bound to happen given the fact that the D&C wasn’t assembled or grouped topically to begin with.

Still, even though the highest two or three levels of headings are kind of an artificially imposed structure, I hope they at least give people a few memory pegs to hand their hats on. By giving a structure, it helps people organize the book in their mind and better remember where different passages are. In addition, by assigning unique titles for each section, readers are more likely to recall the contents of each revelation.

With each chapter-like grouping, I included a timeline of when each section was received. I don’t foresee doing any timelines for other standard works, but for the D&C it made sense because (1) we have so much specific data on date of reception, and (2) it makes up for the lack of storyline.

In all the other standard works, I have two kinds of digression: topical (i.e., explanations) and chronological (i.e., flashbacks). For the D&C, I added a third kind: geographical (i.e., travels). For example, sections 107–112 all happen in Kirtland, except section 111, which was given in Massachusetts (see the section heading in your regular print edition of the D&C). Hopefully these help readers take notice of when people are moving around the map. (You can download my chronological reading checklist for help in reading the D&C in roughly the order it was received.)

Topical digressions are especially helpful in understanding the structure of some passages. The best example is probably D&C 84. Verses 6b–30 are one long parenthetical insertion; the thought that is begun in the first half of verse 6 is resumed in verse 31. Once I understood that fact, a formerly murky scripture passage suddenly flowed a lot more clearly. Hopefully the shaded boxes quickly convey that fact to readers.

The D&C footnotes included several comments on textual history and variations, which I mostly picked up from Ensign articles and BYU publications. These notes can solve some puzzling matters, such as the one pointed out by Robert Woodford:

In section 81, dated March 1832, Frederick G. Williams is given his duties as a counselor to the President of the High Priesthood. In section 90, verse 6, given a year later, March 1833, he is called to that position. In section 107, dated March 28, 1835, the Lord reveals in verses 65–66 that there should be a President of the High Priesthood. (By inference, any counselor to the President would be called after the office was revealed.) Hence, the sequence is just opposite of what we would expect: the position revealed, the person called, and then a delineation of his duties. (Source)

Brother Woodford then goes on to explain how those apparent anachronisms are artifacts of how the D&C was assembled over time. I incorporated his information into the footnotes for each of those three sections so that a reader can understand the answer to the puzzles as he reads.

Other examples of footnotes that clarify the textual background include section 42, or sections 121–123. My main sources are listed at the end of the book.

One thing I still go back and forth on is whether I should include some kind of historical background for each section (like they put in the section headings of your standard 1981 print edition). I haven’t done so yet because (1) it’s a ginormous project that would take a lot of time, and (2) I don’t feel qualified. I might get over those two reservations someday and actually try it, but until then, I recommend Steven Harper’s Making Sense of the Doctrine and Covenants for a good introduction to the historical background of each section.

Even though it is just a draft, with messy footnotes and incomplete figures and appendices, I will be making this book available for purchase on Lulu.com because a few friends have requested (with a lovely cover designed by my even lovelier wife). It’s 364 pages long in full color, which comes out to the ridiculously high price of $90.86. That price is at-cost; I’m not making any money. I very much want that to be clear, because otherwise it looks like I’m fleecing people. (If there’s any doubt in your mind, go to the cost calculator and type in the specs: standard paper, hardcover, color, US trade 6×9, casewrap, 364 pages.) I’ve considered posting a black-and-white version to Lulu, which would be less expensive, but that kind of defeats the purpose of many of the features. I hope to find some other less expensive way of getting color copies into the hands of interested readers, but that could be years away. I personally wouldn’t spend that much money, but if you don’t want to wait that long and you have an extra ninety bucks lying around, knock yourself out. FYI, you can usually Google “Lulu coupon code” or something, and they virtually always have some kind of discount of 10–20% off.

I don’t know about you, but the Doctrine and Covenants has always been, in a way, the hardest book of scripture for me to approach because it seems to require so much outside research and background knowledge. I hope this edition makes it more approachable and easier to understand. I’ve tried to make it the version of the book I wish I had grown up with. A recent convert friend of mine has read it for the first time using this edition (he’s actually reading it in tandem with Bushman’s Rough Stone Rolling and Harper’s Making Sense, jumping back and forth among the three books). He told me he definitely understood the D&C better with this edition than he would have otherwise. I hope that’s your experience as well. Please be liberal with your comments, questions, and suggestions. I’d love to hear what you think.

Jump to Comments
← Prev: How to organize a talk: Chart Next: The Book of Mormon without punctuation →