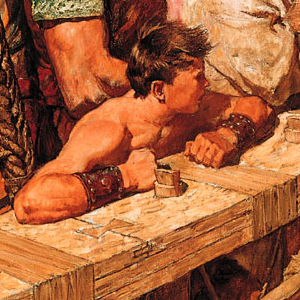 Here’s a resource for sorting out the four people named Joseph who are mentioned in 2 Nephi 3. Apparently the one who was Lehi’s youngest son took up body building from a young age.

Here’s a brief PowerPoint slideshow for teaching 2 Nephi 3, Lehi’s final words to his son Joseph. The slideshow is not a complete lesson; it’s just a quick review answering the question, “Who are the four people Lehi talks about who are all named Joseph?” It begins with a chart from the seminary teacher manual, listing the four verses to look out when hunting for the identity of the four people. Have the class read the verses and see if they can identify the people, then advance the slides to fill in the blanks with their names. (There’s a series of paintings to quickly review the life of Joseph son of Jacob/Israel, to jog the students’ memories.)

Next comes a timeline where the kids can try to figure out what order the Josephs were born in (i.e., who came first on that timeline of world history). Last comes pictures of Moses and Aaron, then Joseph Smith and Sidney Rigdon, for use in comparing their relationships as prophet and spokesman, respectively.

When I gave this lesson, I focused on the prophecy that Joseph Smith and the Book of Mormon would contribute to “the confounding of false doctrines and laying down of contentions.” I gave the kids several examples of how latter-day restored doctrines have answered questions that people have traditionally disagreed on for centuries.

All three of these questions are answered in the Book of Mormon and/or the revelations to the prophet Joseph Smith. It should help us appreciate just how important his mission was, because of the onslaught of falsehoods in the latter-days. The Bible needs help in fighting these ideas, and that’s exactly what the Book of Mormon is meant for.

Sorry if this is kind of messy; I’ve had to throw it up here on the site in time for seminary teachers to use it for their lessons.