Structured Edition of the Pearl of Great Price, draft 1 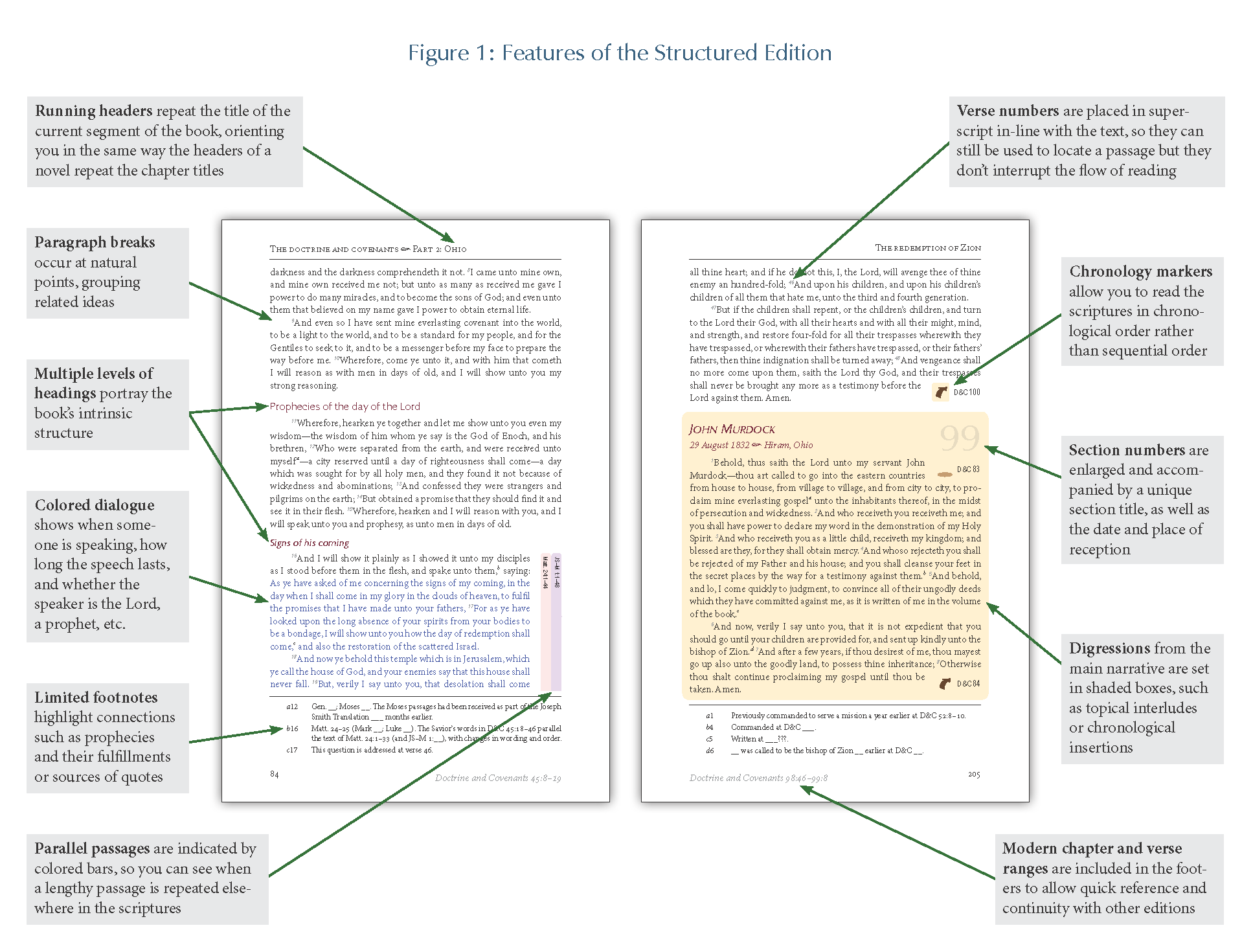 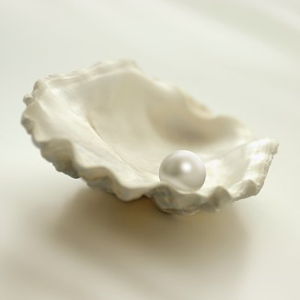 What am I going to use as a picture for the next volume in the Structured Edition? This is the only standard work that's easy to depict. Anyone have a picture of a "doctrine" or a "covenant"?

Not a stand-alone work

First of all, the five entries in the Pearl of Great Price (four “books,” plus the Articles of Faith) do not really relate directly to each other (except of course in the sense that they testify of Christ and his gospel). Rather, they are each closely related to other books in the standard works. As a result, each book employs either parallel bars, chronology markers, or both. For example, both Moses and Abraham use lengthy parallel bars showing the equivalent passages in the book of Genesis, and Joseph Smith—Matthew uses them to show its relationship to the book of Matthew (in the next draft, I will add another bar showing the equivalent passage in D&C 45). Likewise, the Articles of Faith begin and end with chronology markers, showing that time-wise, it is sandwiched between sections 126 and 127 of the Doctrine and Covenants (based on their publication date as the Wentworth letter). Joseph Smith—History employs both parallel bars (sections 2 and 13) and chronology markers (sections 1, 3–12, and 14). See the Chronological Reading Map for the Doctrine and Covenants for a graphical way of depicting this (post is forthcoming).

Incidentally, because each of the five entries is sort of an addendum to a larger work, their brevity resulted in the fact that it never became necessary to use a level-1 heading as I typeset them. 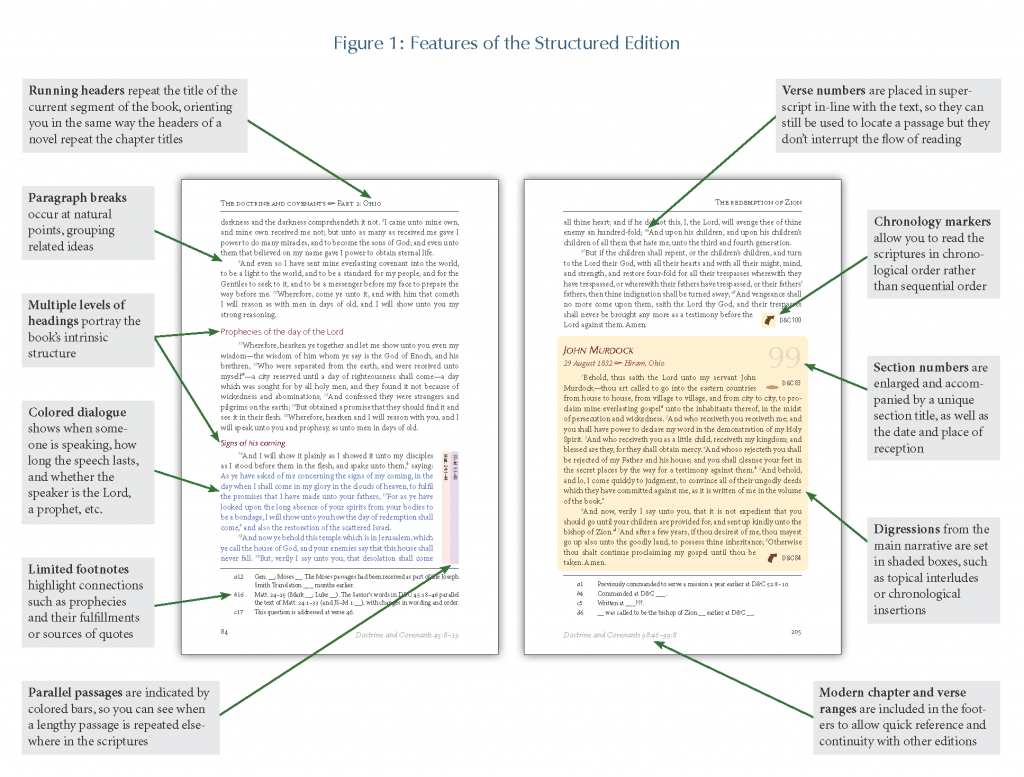 In the section of the book of Moses about the fall, it became apparent that the story of Adam and Eve’s transgression paralleled the story of Cain’s sin, not only thematically but also structurally. I went out of my way to illustrate this parallel structure by using identical wording for the level 4 headings. The wording of the level 3 headings (“the temporal fall” and “the spiritual fall”) borrows from several passages in the Book of Mormon that use temporal and spiritual to describe the effects of the Fall of mankind (e.g., Alma 42:7; Hel. 14:16). I think there is a powerful doctrine being portrayed through this structure in the book of Moses, one which is unique to the restored gospel and which equips us to give a better answer to the problem of evil than any other religion. I am writing about this and plan on posting my thoughts.

Identical or similar phrasing for the headings was also used to show where the book of Moses parallels the book of Abraham. If you open to the table of contents and compare the two, it makes it easy to see at a glance where the two books overlap and where they are different.

The book of Abraham is the only book in the standard works that contains illustrations. Each facsimile was placed alongside the passage that most closely relates to it. In trying to do this, I discovered for the first time that facsimile 3 seems to have an accompanying passage (compare Abr. 3:15 with Joseph Smith’s explanation that “Abraham is reasoning upon the principles of Astronomy, in the king’s court“).

I think I’m not the only one who has always been intrigued by the only examples of pictures in canonized scripture. I plan on eventually making colored versions of the facsimiles, although I don’t think I will put them in the Structured Edition because it adds a layer of interpretation (which is difficult enough already). I would much rather someone more skilled than I do the coloring; they could start with the high-resolution versions I’ve posted. If someone ever does it, I’ll be the first to buy it! I hereby nominate Jay Fullmer! 🙂

Joseph Smith—History currently contains a few very long footnotes at the point where Moroni quotes Old Testament prophecies. They were included because their recitation was part of that angelic visit, and because Joseph invites a comparison between Moroni’s phrasing and that found in the King James Version of the Bible when he mentions that the two differed slightly (JS–H 1:36). It seems in keeping with Joseph’s intent to include footnotes that aid the reader in making the same comparison. However, I might eventually delete them because I want to keep footnotes at a minimum. What do you think?

This draft is already outdated and will eventually be replaced, as I have refined my use of some of the features since exporting it to PDF (such as when to use parallel bars versus chronology markers). But it should give readers a good sense of what it’s like to read the scriptures in this alternate layout. A friend of mine who has already read the Pearl of Great Price at least a dozen times has been reading this version with her husband for their personal study. She told me that it was like reading a different book. I hope others have the same experience of approaching the familiar in unfamiliar ways, as a means of getting closer at the original authors’ intentions in writing the book.