Chronological reading checklist for the Doctrine and Covenants 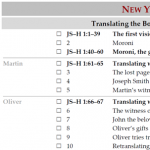 Here is a handout I’ve created to help users read the Doctrine and Covenants in chronological order, in conjunction with Joseph Smith—History and the Articles of Faith. It can be used with the rest of my collection of handouts for giving an overview of the Doctrine and Covenants. It basically provides the same information as the chronological reading diagram, only in checklist form.

It’s a two-page letter-size PDF file, so if you print it front-and-back, it will fit on one sheet of paper. You can download the color version or the black-and-white versions, which I’ve tried to shade just right for photocopying.

This checklist might be especially handy for Gospel Doctrine teachers and class members in the years we study the D&C, as well as for those involved in seminary and institute classes.

This checklist takes the form of a table containing each section number with a suggested title I came up with, followed by the date of reception and the number of verses in the section. However, instead of listing the sections in numerical order (i.e., the order they’re found in the scriptures), I put them in chronological order. In that way, it’s similar to the Chronological Order of Contents in your print edition of the Doctrine and Covenants, although my dates differ because I’ve used more recent research from the Joseph Smith Papers project. I also included all passages from Joseph Smith—History and the Articles of Faith, broken up and inserted where they fit chronologically. This way, you can read all three books of scripture together in the sequence they were produced (I think everyone should try that at some point).

I included the verse count in case some users wanted to use that information to pace themselves or set reading blocks of roughly uniform length (by the way, the D&C’s halfway point verse-wise falls in the middle of section 76, which, I’m guessing, is why the BYU D&C classes chop the book into two semesters right after that section).

I also divided and subdivided the sections to help you get a handle on the basic structure of Church history and of the Doctrine and Covenants. These are the same divisions used in the D&C Structured Edition and on the Divisions of Sections handout.

Hopefully this kind of dividing and subdividing helps readers keep track of broader patterns and events as they read, making it easier to remember the context—a particularly difficult task in this book of scripture, since it lacks a storyline. For an example of one pattern, see Figure 8: Separation as Migration, on page 39 of my monograph on spiritual death.

Jump to Comments
← Prev: Some handouts for a Doctrine and Covenants overview Next: The original chapter breaks in the Book of Mormon →