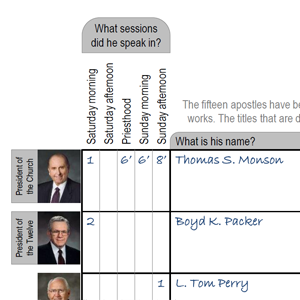 In this post, I will explain my markings and notations on the filled-in worksheet, which you can download below. You don’t have to do everything the same way I did. In fact, most will opt for a simpler method. I just wanted to illustrate the potential for personalized ways of using the worksheet.

Under What sessions did he speak in?, rather than simply check the box, I indicated what order they spoke in. An apostrophe after the number means they were the last speaker of that session. The ‘C’ in Elders Eyring and Uchtdorf’s rows indicate that they conducted. The ‘sus’ means he read the sustainings that are always done on Saturday afternoon.

Sometimes you’ll see a pattern and be tempted to conclude it’s a consistent rule across all general conferences, when in fact it’s just chance. For example, you’ll notice that in every session on this example worksheet, if you look at all those who speak (leaving out the first speaker), the last speaker was always the highest ranking of them. For example, on Saturday morning, Elders Monson, Packer, Oaks, and Eyring spoke. Ignoring the opening speaker (President Monson), of the remaining three, Elder Eyring ranks highest (in authority; Elder Packer ranks highest in seniority), so he spoke last. I’ve heard before that this is standard procedure, in part because it gives leaders a chance to correct any erroneous statements from speakers who preceded them.

All you have to do to test this hypothesis is look at the speaker line-up for other general conferences. In this case, however, when you check, you’ll find that the hypothesis doesn’t hold water. For example, in the April 2015 conference Saturday morning session, Elder Perry spoke last, but President Packer spoke earlier (second). And in the Saturday afternoon session, Elder Cook spoke last, but Elders Bednar and Christofferson spoke earlier. So the idea that the last speaker is always highest-ranking is simply wrong.

I’ll admit to being guilty of occasionally passing on something like this without fact-checking first. This one is a pretty harmless “faith-promoting rumor,” but it’s a reminder that we should always check our facts before subscribing to or repeating such rumors, especially in cases like this when it’s so easy to verify.

Under What was the talk about? and What will I do about it?, I drew horizontal lines to sudivide a speaker’s box if they spoke more than once. As you can see on President Monson’s row, since he usually speaks multiple times, there’s not much room to take notes. That means that if I ever redesign the sheet, I should make a larger space for the president of the Church.

I used three different capital letters to give myself assignments. A capital ‘R’ meant ‘Re-read’; I was distracted or sleepy during the talk, so I want to be sure to re-read it later. A capital ‘L’ meant ‘Liked’; I really liked the talk, which means I will probably want to refer to it again later. A capital ‘Q’ meant ‘Quote’; there was at least one quotable passage that I want to place into one of my gospel quote files, articles I’m writing, or PowerPoint slideshows that I’m making. Of all the notations on this worksheet, these are probably the ones I refer back to most often, after the months go by and my memory of the conference is dimmed. If I ever redesign this worksheet, maybe I’ll turn them into check boxes. [Update: I did precisely that, as you can see by looking at the worksheet, linked at the beginning of this article.]

Back page (General and auxiliary authorities)

On the reverse side, under What sessions did they speak in?, you’ll notice that the numbers always go in order, and always move right as you go down. That’s just the natural result of how this sheet is filled as you go, in contrast to the front side, where the speakers are already known beforehand and placed in order of seniority, not order of speaking.

Under What organization are they in?, where possible, I included the speaker’s calling or position. ‘Q1’ means first quorum (of the Seventy). ‘P’ means president. ‘C1’ and ‘C2’ mean first and second counselor. ‘rr’ means ‘Recently Released,’ when they have someone speak for the last time even though they were released earlier in the conference (like with Julie B. Beck). Having these little facts arranged in a table allows you to quickly look for any data you’re interested in, such as how many women spoke (two), or whether they always have at least one speaker from every organization (no). As I’ve noted before, this kind of stuff is trivial and not really important for being edified by conference. I include it just because I’ve noticed that sometimes you need a smidgin of brainless, fluffy busy work to crank your engine and get your brain running. If it helps you begin paying attention, use it. If it doesn’t, ignore it.

A bit of advice

Notice that I did not fill in every box under What was the talk about? and What will I do about it? There’s no need to come up with something to write in the box, just to have something there. If you weren’t particularly struck with any ideas, it’s OK to leave things blank. In a way, leaving blank boxes highlights the filled-in boxes and helps you see more clearly when your inspiration was coming. That said, sometimes it’s good to jot an obligatory note or two even when you’re not feeling specifically moved to, because it helps you maintain your attention and get the revelatory juices flowing.

Do any of these notation ideas seem particularly relevant or useful to you? Which do not? What other notation methods have you used in your general conference note-taking?