Fourteen fundamentals in following the prophet: Games and worksheets 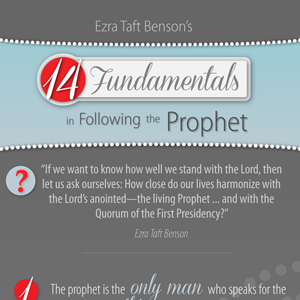 Use the fill-in-the-blank worksheet for a great family home evening or Sunday school lesson.

by Nathan and Jelaire Richardson

Ezra Taft Benson gave a terrific BYU devotional in 1980 called “Fourteen Fundamentals in Following the Prophet.” A year later, it was printed as the First Presidency message in the Liahona magazine for Church members to use all over the world in the home teaching lessons. It has since been quoted numerous times in Church manuals, magazines, and other publications, including twice in the same general conference as recently as October 2010.

This is an important talk in part because it summarizes so well several important principles related to the doctrine of continuing revelation through modern prophets. Because these principles are so crucial to living Jesus Christ’s gospel, my wife turned the talk into an infographic, or meme, that can help people learn the main points of the talk. She also made a matching printable poster, some handouts, and fill-in-the-blank worksheets to quiz yourself or to use when teaching a class or Family Home Evening. In addition to those, I created a picture for each principle, kind of like an icon or traffic symbol, to reinforce the ideas.

If you download the PDF file, you will find several resources you could use in a lesson for family home evening, Sunday school, or other gospel teaching venues.

There is a letter-size color poster version of this infographic, along with a handout version of the poster (color and greyscale) that has the background removed so you can print it without killing your ink cartridge. There is also a picture poster that uses the symbols for each of the fourteen principles, which hopefully serve as memory aids to help people recall each principle. 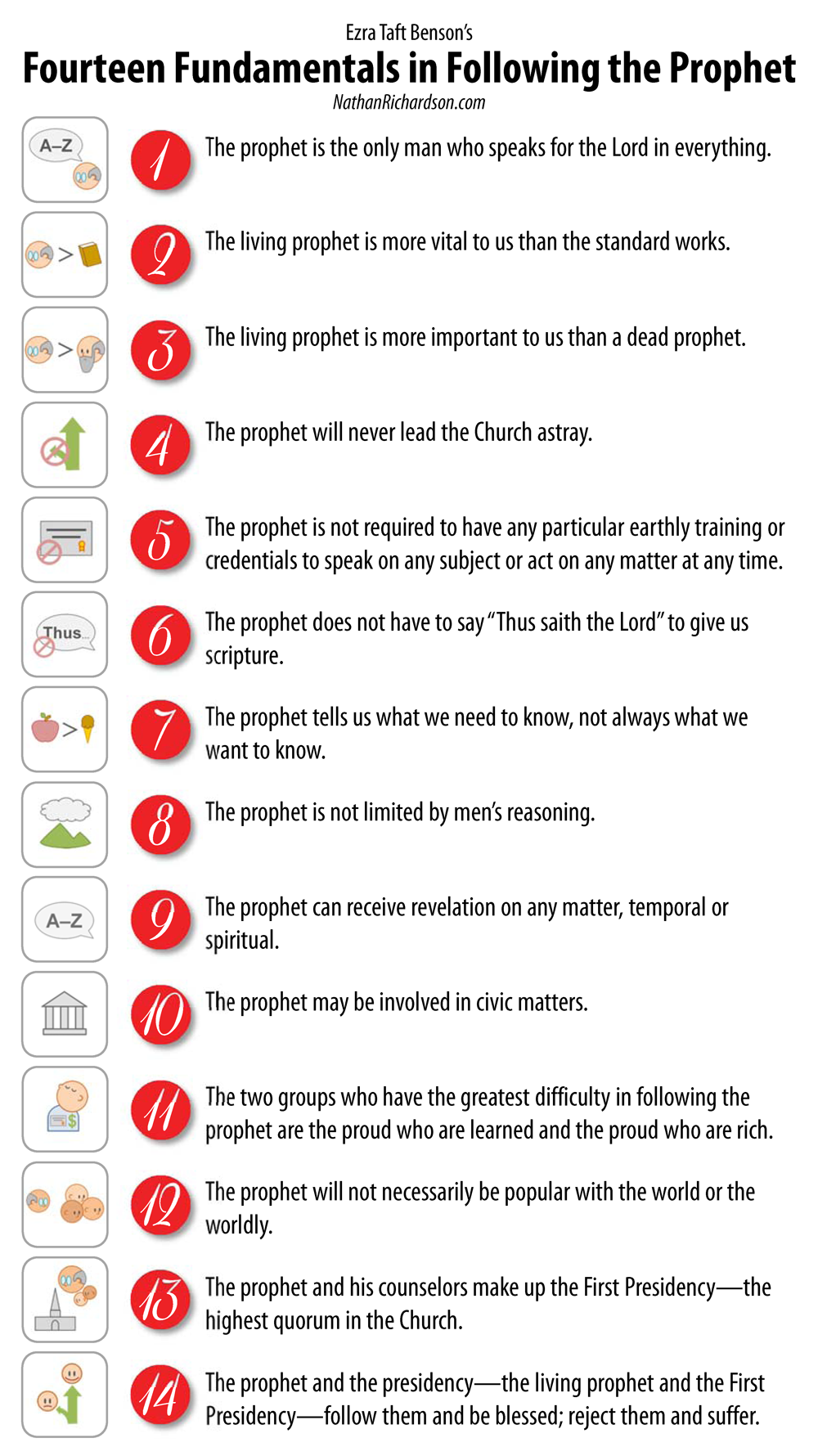 A memorable icon for each principle. 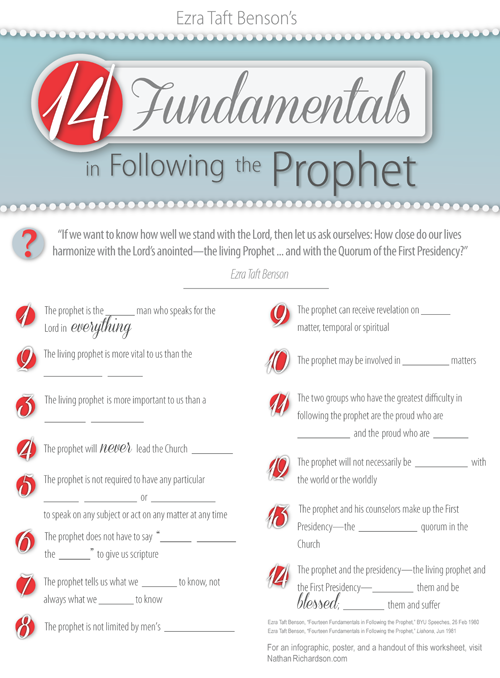 Quiz yourself by filling in the blanks with the key words.

The PDF file also includes a fill-in-the-blank handout (color and greyscale) that omits the key words for each of the fourteen principles. This allows you to have a “teaser” version to use at the beginning of a lesson, to pique learners’ interest in what you’re about to cover, or to have a follow-up quiz afterward to assess what they retained.

Finally, you can print out a deck of cards that has the principles and pictures on them. Depending on how you print them out, you can use them as either flashcards or as a Memory-style matching game. For flashcards, first print the Pictures Page, then on the reverse side print the Principles Page. For Memory, first print two copies of the Titles Page, then on the reverse sides print the Pictures Page and the Principles Page. (I hope that makes sense.)

By the way, if any readers out there know anyone who has the programming skills to help me turn these pictures into a fun little flash game or app, please contact me! I’d love to make this into a simple educational computer game.

My friend Jonathan has suggested what could be considered a “fifteenth fundamental” in following the prophet, or at least, a variation on President Benson’s third principle. In principle number three, Ezra Taft Benson warns against saints rejecting the living prophets by following past prophets. Jonathan Wilson wrote a great post that warns against “Rejecting the Living Prophets by Following Future Prophets.”

That is, sometimes Latter-day Saints are uncomfortable with the Church’s position on some pet issue. As they try to reconcile their desire to hold an opposing position, with their desire to be considered faithful members, they convince themselves that surely at some future day, a future prophet will reveal a change in the Church’s position that will conveniently match the person’s present position. In other words, they consider themselves ahead of the Brethren on an issue, and wish that the Brethren would just catch up. “If only the Brethren would be more open-minded, God would reveal to them what he has already revealed to me.” They sometimes get so enamored of this mental solution that they convince themselves that a revelation is right around the corner.

There are, of course, several problems with this line of thinking. For one thing, even if such a person were right (that the Lord was going to reveal a change in his commandments in the future), that still doesn’t make it right to act on that today.

For example, shortly after the Nephites saw the miraculous sign of the Savior’s birth, some concluded that it was no longer necessary to live the law of Moses (3 Ne. 1:24–25). They probably even cited past prophets and scripture to support their prediction (such as Alma 34:13). They were correct in their idea that the Lord would some day reveal that the Law of Moses was retracted. But they were wrong to live as though the revelation had already come. Until the revelation came—through authorized messengers (3 Ne. 15:5, 8), not their own personal prayers—it was inappropriate (well, to put it bluntly, sinful) to cease keeping that law, or to induce others to cease keeping it. Timing is everything when you have a living God who continually communicates with mankind (there’s a sadly humorous story of ignoring God’s timing at Num. 14:39–45).

For another example, back in the seventies, a Church member in Oregon named Douglas Wallace disagreed with the then-current priesthood policy that restricted black members from holding the priesthood or being endowed or sealed. He apparently thought the Lord wanted things otherwise and could have even cited past prophets to bolster his view (such as 2 Ne. 26:33 or Joseph Smith’s ordaining a black man, Elijah Abel). If Wallace was predicting that the policy would soon change, he would have been right, since it did change in July 1978 when the prophet and apostles received a revelation (see OD-2). But in spring 1976, a little over two years before that revelation was received, Wallace ordained a black convert named Larry Lester as an act of protest. Douglas Wallace was excommunicated within weeks (source). Note that he very likely would have used the argument that “Soon the Brethren will change the policy/practice and allow these ordinations. I am completely in harmony with the upcoming revelation that I anticipate.” That statement would be 100% true but also entirely irrelevant; his leaders were absolutely right to discipline him. Even though he would have been right about a revelation coming—and less than three years away!—he was still wrong to ignore the current policy under the living prophet. That’s what our covenants are all about.

But there’s an even worse consequence of prioritizing hypothetical future prophets over current prophets: you could very easily be wrong. And when that turns out to be the case, you have now lulled yourself into carnal security and possibly gotten involved in gross sin. Not only that, but you may have induced others to sin, based on the rationale you’ve been promulgating.

A hypothetical example would be polygamy. Imagine if a person convinced himself that the prophets were going to announce any day now that polygamy was authorized again. If he dwelt on that prospect, it’s easy to see how it could begin to shape his thoughts, his plans, and his behavior—in ways that are inimical to the law of chastity, including unchaste thoughts or emotional infidelity.

Of course, I don’t think that’s a huge problem in the Church, so perhaps a more realistic example is worth mentioning: same-sex lifestyles. Some people in the Church have convinced themselves that the prophets are mere years or even months away from announcing that homosexual relationships are within the bounds of God’s law of chastity, as long as they are monogamous. They put unwarranted faith in a revelation that “surely must be just around the corner!” In other words, they reject the living prophet by following a hypothetical future prophet that just happens to be more convenient to their views. If you think about the practical effect of such wishful thinking, though, it’s easy to see how it could prevent someone from moving forward in trying to fully embrace the gospel in the way they live. May we never hold out on consecrating ourselves in every way, just because we want to hang on to a preferred notion or habit.

The principles in this talk only become more important with every passing year. As the bulk of society relies on worldly reasoning that rests on questionable assumptions, or as even some members within the Church claim to have greater understanding of God’s will than those who hold the keys of this dispensation, Latter-day Saints must be willing to recognize and act on the will of God as expressed through his spokesmen, even when it is socially uncomfortable to do so.

Jump to Comments
← Prev: Structural chapter reading chart: The Doctrine and Covenants Next: Kings of Judah and Israel: Chart →